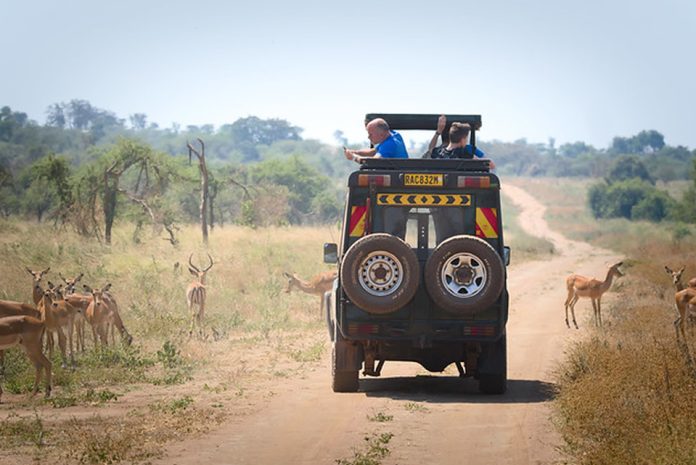 It’s time for the next trip in Rwanda. From gorillas to wildlife, there is a lot to see and do on safari to Rwanda.

Two years ago I travelled to Rwanda and I had a great stay while there. Rwanda is an unknown country to most of the people but it turns out to be one of the most exciting countries in Africa. And whenever you think of Rwanda obviously what runs into your minds is the mountain gorilla trekking activities.

While in the land of a thousand hills, I prepared for the awesome memorable experience and went gorilla trekking adventure in the wild areas of volcanoes national park and my time with the gorilla was terrific, full of joy and anxiety. Watching the mighty gorillas in their habitat with the dominant silver back leading the family with mothers feeding the young ones as the juveniles kept swing in trees and playing to each other always kept my nervous system active that I would not spoil any second blinking not to miss out whatever the group was doing that time.

This was as adventurous as I hiked through the forested bamboos ranges with other trackers for more than 4 hours till we reached the mighty gorillas deep in the misted ranges, we were give 1 full hour to relate with the gorillas as we also kept enjoying and feeling the sounds of nature with numerous bird spices making beautiful Eco sounds

We had a great time with these huge primates as we watched them relate amongst themselves and other wild life in the jungle. I thought these gorillas were savages but to my surprise I got to know that they are peaceful animals that feed on tree shoots, stems, and fruits and they are also shy animals when you get so close to they get scared and move away. I also took incredible photos of the gorillas.

While at volcanoes national park, I also went to the Diana Fossey tombs and her research centre. This lady was a primatologist who fought hard to keep these gorillas alive in the 1940s that were being killed by the people trying to settle in their habitats. She made these gorillas her own family and they were inseparable. We looked at the materials she used and also some of her findings about the gorillas. All in all I had a great with gorillas in Rwanda that has forced me to go back for a wildlife safari in Rwanda.

Now it’s time for my next trip in Rwanda to Akagera national park the home of the big wildlife. All I know about Akagera national park through documentaries and articles it is the home of the big mammals like the elephants, zebras, antelopes, elands and the big bird species for bird lovers. It has a behind scenes activity of knowing the formation and the efforts made to conserve and preserve the animals in the park. I was told that it has two lakes within where I can do a boat ride and spot fishing.

The newly re-introduced king of the jungle in Akagera puts me on pressure to go wildlife and gaming, these lions where reintroduced back from South Africa’s Kruger national park following the extinction of the lions from Rwanda in the early (0’s, This was due to continuous poaching and pressure of human settlement on the reserved game land this too was followed by the 1994 genocide massacre that resulted into lots of human losses and destruction of numerous country properties, however after the Rwanda government plans and negotiations with the South African park the lions can now be tracked and seen in Akagera national park and its good news that as of current there are even newly born cabs adding to the pride.

I cannot wait for the game drive around to meet my favorite animals the black and white striped zebras. Just looking at how these animals’ skin color and texture was designed make me fall in love with nature. I cannot also wait to grab myself a big fish in the waters of Africa.

The excitement is too high in that I wish the date set for my wildlife safari to Rwanda would be extended.

10 Best Things to Do in Rwanda