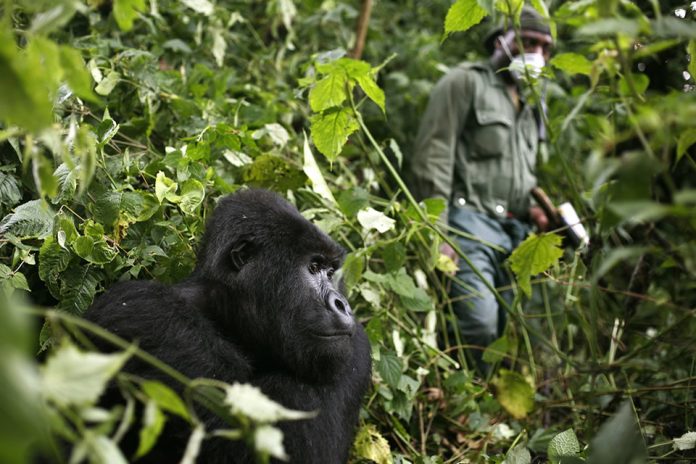 Gorilla trekking is Rwanda’s number one tourism activity. In Rwanda, Gorilla trekking is done in volcanoes national Park which is situated in northern region – approximately 2-3 hours’ drive from Kigali city.  Every year, a large number of tourists visits Rwanda purposely to trek Gorillas thus earning the country a lot of foreign exchange which is used to develop the country in the following ways:

Gorilla trekking as led to the construction of infrastructures like roads, schools, health centres and clean water among others. It should be noted that part of the money obtained from Gorilla trekking is used to develop areas near Volcanoes National Park. Such areas like Musanze, Gisenyi, Kibuye among others are partly developed due to Gorilla trekking.

Many people are employed as rangers, security guards, tour operators, safari guides among others. Such people are able to facilitate the families out of Gorilla trekking activities.

Gorilla Trekking has facilitated the setting up of lodges and Hotels in Rwanda especially the nearby areas and those in Kigali city. Mountain Gorilla View Lodge, Virunga Lodge, Sabyinyo Silverback Lodge, Le Bambou Gorilla Lodge, Lake Kivu Serena Hotel, Kigali Serena Hotel, Manor Hotel, Muhabura Hotel and Kinigi Gues House among others have been set up due to Gorilla Trekking.

Gorilla Trekking has widened Government tax base – safari lodges, tour companies, safari vehicles aamong others are taxed by the government of Rwanda. Such taxes are used to develop roads, schools, tightens security in the country and health centres among others.

Gorilla Trekking has made Rwanda famous internationally – the world tourism exhibitions of Gorilla trekking has marketed the country more and more. The Kwita Izina national ceremonies in Rwanda are organized every year to name new born babies Gorillas in Rwanda. Such ceremonies make the country known worldwide since they are attended by domestic and international visitors.

Gorilla trekking has facilitated the preservation and conservation of wildlife in Rwanda. Tight security is now put on Gorillas and their habitats – more so, other parks like Akagera and Nyungwe Forest National parks are also highly conserved to promote tourism in Rwanda.

Volcanoes national park was ranked among the world heritage sites due to Gorilla Trekking. The ark is now famous and protected by international agencies among others.

The Volcanoes National park is now the number one park to many tourists who come to Rwanda. Other activities like chimpanzee trekking in Nyungwe, Game drives in Akagera National Park among others are supplemented to Gorilla trekking.

Friendship is created– this is because Gorilla trekking unites many people who come to trek Gorillas in Rwanda. Volcanoes National Park is a major meeting point of many people.

Gorilla trekking has facilitated the development of small scale business in Rwanda. Most of products produced are sold to tourists at higher prices compared to domestic buyers. This has attracted more production.