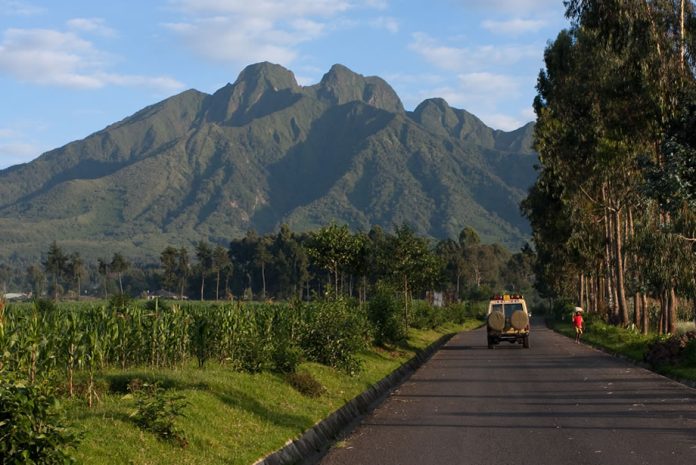 Volcanoes national park is located in the northwest of Rwanda near the boarders of Uganda and democratic public of Congo. It is situated in a small village called Musanze which was previously  formally called Ruhengeri as it can be accessed by public transport  though Gisenyi or Kigali from the international airport taking 2 hours to reach the gates of volcanoes national park. You will be required to travel at the park very early in the morning take you though the procedures and protocols, requirements needed to do this activity. Hopefully, gorilla tracking in Volcanoes National Park may even take on the first day of your arrival at the park as it may not even last the all day although some tourists tend to request for an extension of gorilla tracking due its shorten.

When you look back in history, the Volcanoes national park spans around 160square kilometers as it is believed to be the oldest national park in Africa. It was initially in a small area of Karisimbi, Mikeno, and Visoke. It was gazetted for a reason of poaching thus it had reduced the number of animals and revenue that was collected by the government of Rwanda.

In 1929, the park was extended to Rwanda of which Belgian government and Congo were responsible for the park after all, it was named Albert national park for some period of time. During the year 1960, it was divided as Rwanda and Congo were having their independence respectively. By the end of the decade, It was almost half of the original size although between 1990 and 1994, it was turned in to a fighting zone during the genocide which many people died between the wuto and the tusi. In 2005, Rwanda introduced the annual naming of the new young baby ceremony called Kwita Iziina which is done every year in volcanoes national park.

In 1967, American zoologist Dian Fossey as an scientist did some research on these amazing apes (Gorillas) in the forest of Congo who later fled to Rwanda due to the insecurity that had happened in Congo. She later set up a research centre in places of visoke and karisimbi and the research centre was called karisoke research centre. She was strongly against the ideal of poaching of animals which later brought problems to her as she was killed and later was buried near her favorite Gorilla called Digit.

Virunga volcanoes with in national park are among the most desirable inspiring sights to be enjoyed apart from Gorilla tracking as it is has the seven hills surrounded by good scenery of bamboo forests which is possible for tourists to come and see iconic and amazing gorillas.

There are eight habituated Gorilla groups that are living within volcanoes national park namely, Susa made up of 41 gorillas, Sabyingo, Amahoro made up of 17 members, Group 13, Kwitonda made up of 18 members, and Umubaro made up 11 members, hirwa. Etc. Furthermore, Gorilla Tracking is the top tourists’ activity for anyone interested in the national park. But the best period to carry out this activity varies a number of seasons as from June to September and also from December, January and February tend to be dry favoring a number things like movements of both cars driving the tourists  towards the park that are made much easier both within and outside the park plus also these primates in the dry months tend not to move a lot in the park because food may not around thus limiting their movements than in the wet periods of March, April, May, which are wet  of which in those months, they usually move too much looking for food from highland to lowland areas.

The permits in the dry months of June to September and from December, January and February tend to be on a high demand as compared to the wet seasons thus you may find that in the wet months of touring, permits go as low as all most half of the original price were tourists do request for a double trek because of their low prices. But of lately, 750 dollars is charged to trek this activity. RDM tourism and conservation Reservation office is responsible for issuing of Gorilla permits in the national park. For tourists who want this activity, the best itinerary that would take you mindless is a 3 day Rwanda Gorilla Safari as an English speaking guide will take you through all the groups that will be trekked at that time normally in those morning hours as you will be first entertained by the Kinyarwanda dancers.

Some of the requirement needed to do this safari activity as whole is bringing raincoats, layered clothes to keep you warm, wearing long trousers to prevent insects from biting he tourists plus also bringing water proof back bag which can be used to carry cameras protecting them from damaging the inner parts of the camera after all, a good trusted porter is needed to carry these items as tourists are trekking these primates.

If one wants to stay either within or outside the park to ease the movements of tourists, there are number of lodges  that are available having various accommodations rates ranging from luxurious, midrange and then budget accommodations and these include the following; virunga hotel, Home Inn, Ia Palme Hotel, Red rocks Rwanda, Mountain Gorilla Nest Lodge, Sabingo Silver back Lodge and more others.

Guide to Gorilla Trekking in Rwanda

Guide to Gorilla Trekking in Rwanda